Are There More of You?: click for promo film

“If you lay yourself open, people will jump in with both feet, won’t they?”

In her own one-woman comedy drama, Alison Skilbeck tells the linked tales of four women, Claire, Sophia, Sara and Sam, with only a postcode in common. Painful, scary, hilarious, and heart-warming, the stories chart each wildly different character’s search for love and happiness. 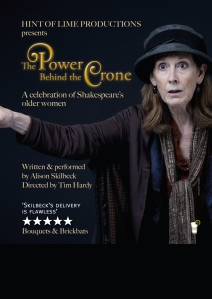 The Power Behind The Crone: click for promo film

“There are no good parts in Shakespeare for older women.”

Professor Artemis Turret, played by Alison Skilbeck, sets out to refute these words in an illustrated lecture. Her old chum, international star Dame Bunti Smart, who was to perform the speeches, lets her down. Professor Turret is forced to unveil her own hidden theatrical talents in seven wildly contrasting roles.

‘Books are good enough in their own way, but they are a mighty bloodless substitute for real life’.

Robert Louis Stevenson’s words resonate for Francis Kenworthy, played by Tim Hardy in Simon Brett’s new one-man play, directed by Alison Skilbeck. Francis has always used books to hide from reality, and help him forget the brutalities of his Victorian upbringing, but a family accident forces him to face real life. The seeds of tragedy have been sown long ago; a violent outcome is inevitable. 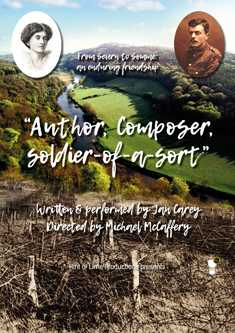 A celebration of the friendship between the First World War poet and composer, Ivor Gurney, and musician and first woman music critic, Marion Scott, written and performed by Jan Carey. It was to Scott that Gurney sent his music and poetry from the trenches. His writing was coloured by the horror of the Great War and his deep love for his native Gloucestershire. Yet after being gassed at Passchendaele, Gurney’s slow deterioration into madness showed that, despite their very different backgrounds, Scott and Gurney forged an enduring friendship that withstood both war, illness and despair, as well as triumph and joy.

In October 1942, Eleanor Roosevelt, wife of the President, takes a dangerous trip to wartime London, to visit US troops, and see how the British, most importantly the women, are coping. Granted special permission to use Eleanor’s writings, Alison Skilbeck’s one-woman show explores the public, and hidden life of one of the most extraordinary women of the 20th century, a woman beset by deep personal insecurities and tragedy, but one who never lost her passionate belief in the strength of the human spirit.

“‘Proof’ denies faith, and without faith we are nothing. The universe is a divine miracle, Galileo, not a clockwork toy.” Pope Urban (1624)

In this reprimand by Pope Urban is Galileo’s tragedy, a mistaken belief that if he supplied the church with proof that the planets revolve around the sun, he would enlighten the world while escaping persecution. He was wrong. Galileo never understood his differences with the Church were not about reason, logic, and scientific fact. They were about politics. When he finally came to realise this, on trial for heresy, it was too late. A regular with the RSC, Hardy has previously toured The Trials of Galileo throughout the UK, America, Europe and had a sold out critically acclaimed run at the Edinburgh Fringe.